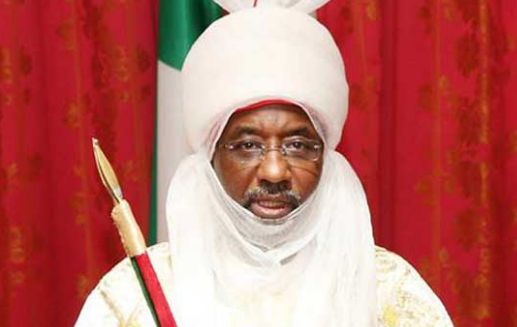 The picture of emir of Kano, Muhammadu Sanusi ll, has appeared last in the hierarchy of portraits of the five first-class emirs of the state we have observed.

This newspaper reports that Mr Sanusi’s portrait was unveiled at the Coronation Hall during his installation as the emir of Kano by the then governor of the state, Rabi’u Kwankwaso in 2014.

The portrait remained at the hall even when the incumbent governor, Abdullahi Ganduje assumed power in 2015, and was juxtaposed with that of the governor and President Muhammadu Buhari.

However, following the crisis that broke out between Messrs Sanusi and Ganduje, the former’s portrait was removed by angry supporters of the latter when he was announced as the winner of the March 23 governorship supplementary election.

We observed that with the appointment of four additional first-class emirs, the state government restored Mr Sanusi’s picture alongside those of the four additional monarchs, which had been hung on the outer and inner walls of the Coronation Hall on Thursday.

It was, however, observed that the picture of Mr. Sanusi, who is the chairman of the state council of traditional rulers, appeared last in the hierarchy, raising eyebrows among the residents.

Recall that Mr. Ganduje on May 8 created four additional emirates with First Class emirs in the state, a move that was alleged to have been carried out to whittle down the influence of Emir Sanusi.

We reports that the two leaders fell out after the state governorship election, as Mr Ganduje accused Mr Sanusi of supporting his main challenger, Abba Kabir-Yusuf of Peoples Democratic Party, PDP during the gubernatorial election in the state.