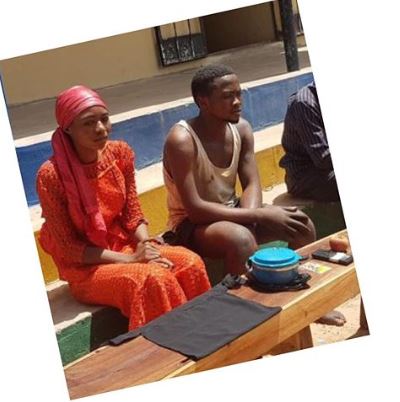 Gombe State Police Command has arrested an 18-year-old lady, Hadiza Babayo, for criminal conspiracy and kidnapping of her five-year-old cousin.

The suspect was identified by one Muhammad, the 7-year-old brother of the victim. The mastermind was said to have picked the victim and delivered her to her accomplice in a hotel in Nayi-Nawa quarters.

“Hadiza Babayo, my elder brother’s daughter went to pick my two kids Muhammad and Aishatu from school; later Muhammad came crying and narrated that Hadiza came to pick them and she asked him to wait for her to get Keke Napep and since then they did not come back,” the father of the rescued kid revealed.

The arrest and interrogation of Hadiza led to the arrest of her accomplice, Bala Shuaibu, who had earlier demanded N6million ransom for the release of the kid.

Hadiza Babayo confessed to the crime and stated how she and Bala abducted the victim from Gombe High School, kept her in a hotel from where they demanded a ransom of N6million from the victim’s father.

Apart From Dismissal, Which Other Punishment Do You Think The SARS Official Involved In The Death Of Tiamiyu Kazeem Deserves

AFRICAN GIANT!!! Burna Boy Shocks Interviewer As He Walks Out On His Mum And Grandfather (Watch Video)

‘Oga, Please I Need To Sit Where I Can Stretch My Legs’ – Metuh Begs Prison Warders

SENSE OR NONSENSE??“A Husband Is Better Than A Degree” – Calabar Teenage Girl Insists