A driver is lucky to be alive after his car fell into a huge sinkhole as Storm Ciara battered Britain.

The hole on Hatch Road in Brentwood, Essex, appeared in the early hours of this morning, with residents in the nearby area being asked to evacuate by emergency services.

Photos show what appears to be a Toyota partially submerged in the hole. Emergency services were also at the scene as they tried to recover the vehicle.

Ollie Watson, 50, stumbled upon the submerged car outside his house at around 2:30am.

He said he didn’t hear the crash which happened a few doors down and only went to investigate after his daughter mentioned a disturbance outside.

“I thought it was a road accident at first. We didn’t hear it. Our daughter heard a bit of a commotion. We then thought that the fire brigade had cut the car in half – but it was actually just sticking out of the hole. 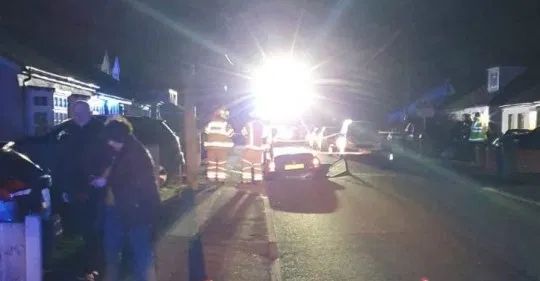 “It’s very unusual. My neighbours were out there, and a few people from across the road.

I imagine that it will sit there for a while. They must be worried about more sinking, I suppose.”

According to Metro UK, a spokesperson for Essex County Fire and Rescue Service said:-

“Firefighters were called to Hatch Road at 01:34am after reports that a sewer had partially collapsed. On arrival, crews reported that the hole extended into the road and a car was trapped.‘Six properties were evacuated due to unstable ground.”