The Federal Road Safety Corps (FRSC) says it has arrested a total of 144 traffic offenders for overloading passengers vehicles in a bid to mitigate the further spread of Coronavirus among commuters in public transport.

The Corps Marshal of FRSC, Dr Boboye Oyeyemi, disclosed this in a statement by the Corps’ Public Education Officer, Mr Bisi Kazeem on Thursday.

According to Oyeyemi, all categories of transporters should ensure full compliance with the provisions of Regulation 108 (1) of the National Road Traffic Regulation 2012 on compulsory passenger manifest.

He directed all public transport operators to apply necessary precautionary measures in their parks and terminals as failure to adhere strictly to this order would attract the necessary sanctions.

“The corps observes that despite the palpable spread of the virus, public transport operators continue to board passengers to full capacity without consideration to social distancing, passenger manifest and seat spacing of passengers.

“This unhealthy behaviour if not put to check on time has the potential to fuel the spread of the virus.

“All passengers travelling; not only during the epidemic regime but at all times, have the statutory obligation to write down their full information in the passenger manifest before commencement of the trip,” he said.

Oyeyemi noted that putting down details of passengers on a manifest was a mandatory and acceptable practice all over the world.

He said that the document contained basic information including contacts of next of kin of all the passengers travelling in the vehicle for ease of identification and contact in the case of any eventuality.

“The emphasis on the need for compulsory adherence to the NRTR 2012 provision is to make sure that details of all passengers conveyed in each vehicle are adequately collected.

“This is to arrest further spread of the virus per chance any of the passengers is tested positive even after the trip,”

He warned passengers to comply by filling the passenger manifest before their journey commences.

He said that any transporter who violated the order would be made to face the wrath of the law when apprehended. 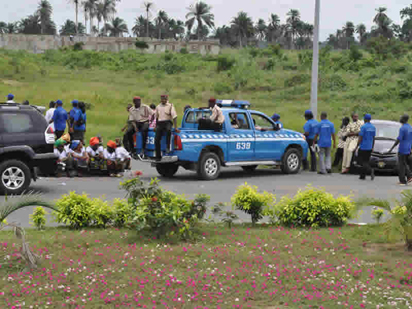 On overloading, Oyeyemi said that the figures of the arrests was drawn from 16 states with the highest number of arrests recorded in the Federal Capital Territory where a total of 52 overloaded vehicles were impounded.

He added that Lagos State followed with a total of 17 arrests.

He said that the essence of the enforcement was to maintain social distance amongst passengers in vehicles as a panacea to mitigating the spread of the deadly virus.

Oyeyemi ordered all pubic transporters to ensure full compliance with all precautionary measures to curb the spread of the dreaded COVID-19 pandemic.

He listed the directives to include sanitisation of motor parks/terminals with emphasis on objects and areas that people frequently come in contact with such as rails, grab handles and seats.

He said that transport operators should ensure reasonable social distance on seating arrangements for waiting passengers in their parks and terminals.

Oyeyemi called for provision of temperature readers to test all passengers before boarding and alcohol based sanitisers in vehicles for the use of all occupants including drivers and conductors and passengers.

TOO BAD!! UCH Openly Begs For Funds To Fight Coronavirus Despite Billions Donated

Do You Agree? Women Need Men More Than They Need Us – Lady Says

Premier League Football May Restart Soon, But There Are Conditions To It (Read Details)

Atiku Joined Millions Of Nigerians To Celebrates Tinubu At 68

PAID!! Our Monday 23rd March Giveaway – The 3 Winners Have Been Paid (See Proof)

PAID!! Our Sunday 22nd March Giveaway – The 3 Winners Have Been Paid (See Proof)

PAID!! Our Saturday 21st March Giveaway – The 3 Winners Have Been Paid (See Proof)

I Tested Negative For Coronavirus – Dangote

PAID!! Our Friday 20th March Giveaway – The 3 Winners Have Been Paid (See Proof)

‘Barcelona Is Waiting For Me!!’- Juventus Legend Pirlo

Smokers Have Higher Risk Of Contracting Coronavirus Than Others – WHO

PAID!! Our Thursday 19th March Giveaway – The 3 Winners Have Been Paid (See Proof)

“It’s Getting Tough For Me, I Can’t Deal Anymore” – Yvonne Jegede Cries Uncontrollably

“Lagos Coronavirus Cases May Rise To 39,000” – Lagos State Commissioner For Health (SEE WHY)

Yoruba Actress, Kemi Afolabi Cries Out After Her Husband Did This To Her

LET’S DISCUSS!! Are You Able To Get Three Meal Daily During This Stay At Home Period?

Coronavirus: Ogun State Closes All Its Borders With Neighbouring States And Republic Of Benin

THIS IS GOOD! Man City Offer Use Of Etihad Stadium To Health Workers To Fight Coronavirus

‘We Will Defeat Coronavirus Together’- Nigeria Star Abdullahi Speaks Out

ITS UNBELIEVABLE! Ex Arsenal Star Song Says He Is SHOCKED By His Club Sacking Him

Coronavirus: Reno Omokri Sheds Light On The Jobs That Are Most Important

Four Bridegrooms Arrested For Going Against Restriction Order In Kaduna