13 fake soldiers accused of using military uniform to perpetrate crimes in Lagos in spite of the lockdown order issued by President Buhari over the outbreak of Coronavirus, have been arrested by the Nigerian army.

It was learned that some suspects who were nabbed wearing uniforms with the ranks of Colonel, Lieutenant Colonel, Major and Captain at different parts of Lagos, also forged an Army Provost letterhead for visa application.

This brings the total number of impersonators arrested in different parts of Lagos during the lockdown period, to 41.

“You will be shocked at the level they are impersonating the army. Both the Lieutenant and the Major have a photo frame they used to deceive members of public and when you check their internet profile or page they looked real as military personnel.

“They have used provost letter head to apply for visa but unfortunately they took a wrong channel of applying because we do not do it directly.” 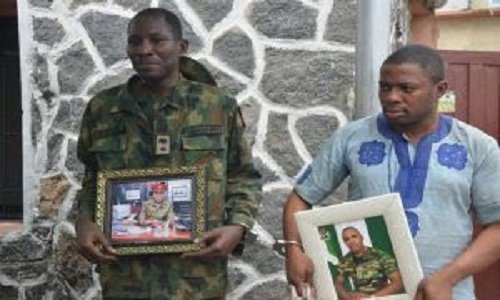 Naira Marley Advises Fans On What To Do Instead Of Raping

It Is Safer To Worship From Home, Despite Lifting Ban On Religious Gatherings – FG

Babcock Student Breaks Silence After Being Accused Of Raping 24 Ladies

Tinubu Joins The Campaign For Justice For Uwa, Tina And Jennifer (Photo)

THIS IS SERIOUS!!! Elderly Man Caught Consistently Molesting A Lady Inside A Bus (Watch Video)

Why We Will Not Reopen Worship Centres – Oyo Govt

SO SAD! Pastor And His Wife Killed On Their Farm In Taraba State

Sanwo-olu And I Were Scared – Lagos Dep Gov, Hamzat

JUST IN!!! Two Killed, Others Escape As Police Foil Kidnap In Kogi

I Am Solidly Behind You – Buhari Assures Adesina

TOO BAD! 21-year-old Man Stabs Friend To Death Over Girlfriend In Bauchi

I Want To Be A Football Manager – Arsenal Legend Pires

Juventus Need To Contact Chelsea If They Want Jorginho – Agent