Reality TV star and former housemate of Big Brother Naija (BBN), Uriel Oputa has launched a search for a husband on Instagram following the launch of her Instalive dating show.

Tagged “Win UUs Heart” the Instalive dating show launched over the weekend by Uriel is a platform for the Big Brother Naija 2017 contestant to search for a partner who will become her Instagram husband.

According to Uriel who once opened up to her fans about her mother’s failing health and how it was making her consider the option of having a child in an unconventional way, she is on a desperate search for a better half.

Uriel, who recently revealed that she has been single for over 5 years now and is desperate to get back into a relationship, will select one from over 15 suitors who have signalled their interest to partake in the Instalive dating show.

In one of the latest episodes of the show staged in conjunction with the Chief executive officer, CMC cars, Chidi Mike, Uriel had a live date with different suitors asking them questions and getting to know more about their personal lives.

According to reports, Chidi Mike, of CMC cars, has promised to give her the sum of N5 million if she succeeds in hooking a man on the Instalive dating show. 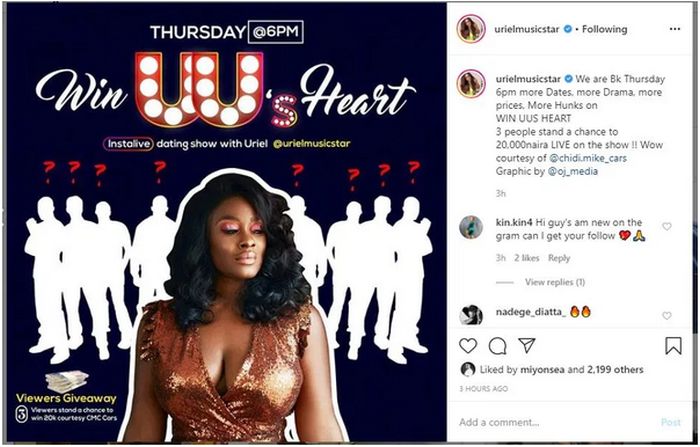 Evil Woman Drills Nail Into Head Of Her Teenage Housemaid

They Want To Blackmail Me With Aketi Whisky, Says Akeredolu

BE HONEST!! Which Song Made You Love Burna Boy?

Ginger Me vs Alien vs Woman – Which Is Your Favourite Rema’s Song At The Moment?

SO SAD!! Man Dies Of Coronavirus After Breaking Social Distancing Rules Just Once

C. RONALDO!!! He’s The Greatest Footballer In The World (See The Record He Broke After Joining Juventus)

LET’S DECIDE! Between Chelsea, Manchester United and Wolves — Who Will Clinch The Top Four Spot?

A MUST READ! Why You Should Not Bath With Your Partner

Saraki Attacks APC For Linking Him With Hushpuppi

Why I Named My Grandson, Goodnews – Obesere

Why I Said Fraudsters Girlfriends Should Be Arrested Too – Etinosa Idemudia