Media personality Denrele Edun, known for his eccentric fashion style and personality, has defended his friend Kim Oprah after Tacha advised her to fix her insecurities during their Big Brother Naija reunion.

Day 3 of the show saw a face-off between Tacha and Kim Oprah.

During their heated argument, after Kim Oprah accused Tacha of being arrogant and boastful while citing her famous slogan about how other housemates accompanied her to the Big Brother house.

Tacha then replied saying she is insecure and needs to fix it.

Show host Denrele has now reacted saying arrogance is the camouflage of insecurity, and that Kim Oprag is a boss!

“ARROGANCE IS THE CAMOUFLAGE OF INSECURITY!

Kimoprah is A BOSS! And that’s why I’m forever in your corner! KIM, You’re doing WELL and we’re damn proud of you!

Confidence is silent. Insecurities are loud!” he tweeted

See his Tweets below:- 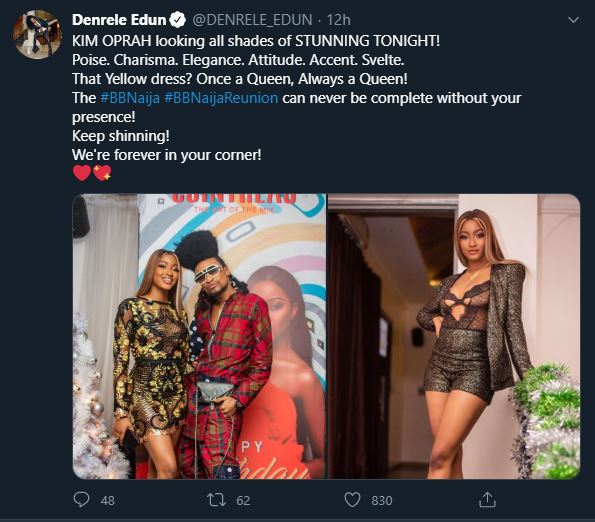 Ozil Still Has A Future At Arsenal, Insists Arteta

I Don’t Want To Know About My Lover’s Past, I Love What I See Now – Tonto Dikeh

Sane Takes Bayern No 10 From Coutinho

Taxi Driver Who Bashed A Man’s Fence Goes Emotional As The Man Gifts Him N50,000 To Repair His Car

OH NO!! 29-Year-Old Okada Rider Kills Himself After Police Refused To Release His Bike Seized

Coronavirus: I Can’t Hand Over To My Deputy — Akeredolu

Liverpool Are Not Thinking Of Next Season Yet – Jurgen Klopp