Nigerians on Instagram have resorted to insulting and blasting Nigerian music artist manager and the founder of record label Made Men Music Group, Ubi Frankilin after it was reported that he celebrated securing Davido’s new number.

Ubi was said to have screenshot Davido’s new phone number on his phone and it was seen that he saved the new number as “Davido Banana Island New” . Ubi decided to flaunt this online for people to see that he has the new number.

Recall that few days ago, Davido announced that he had changed his phone number, so as to take care of himself well. He wrote;

“If you can’t reach me, I will contact you. All my life, I have put people before me, i think it’s time to actually live my life and take care of myself. I have changed my number, I needed some cleansing to do, love you all”

Apparently, Ubi Franklin is one of the very few Davido wants to keep in touch with in his new private life. 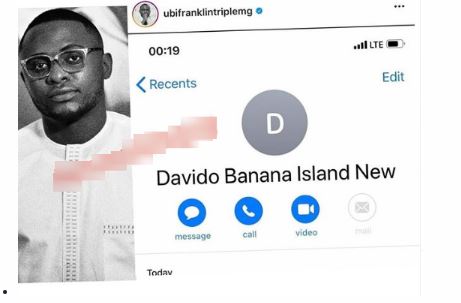 See how Nigerians are reacting to Ubi Franklin’s announcement;

“Does this even make sense FFS”

“This man doesn’t have sense”

wtf! This guy smell of classless! Get a hold of yourself man! This wasn’t necessary!”

The post ‘You No Get Sense’ – Nigerians Blast Ubi Franklin For Announcing That He Has Davido’s New Phone Number appeared first on Naijaloaded | Nigeria’s Most Visited Music & Entertainment Website.

COVID-19: Why Universities May Not Be Reopening Soon (SEE WHY)

TRUE OR FALSE? “Liverpool The Best Team, But De Bruyne The Best Player”

TRUE OR TRASH?? “Hushpuppi Is A Genius And An Icon” – Music Promoter Klever Jay Ikell Says

JUST IN!! Ngige Apologises Over Keyamo’s Outburst On 774,000 Jobs

How I Prophesied Removal Of EFCC Chairman – Primate Ayodele

Kanu Nwankwo Calls For Use Of Face-Mask; Leads Awareness On COVID-19 Realities (Pics)

“Don’t Be There For A Man When He Is Down, Except He Is Your Husband” – BBNaija’s Princess Advises Ladies

“If It Means To Lock Down Again, We Will Not Shy Away From It” – Boss Mustapha

WHO Gives Latest Coronavirus Update On Nigeria, South Africa, Others

Nigerians React To Suspension Of Ibrahim Magu By President Buhari

Edo 2020: Obaseki Will Be Shocked At Outcome Of Election ― Ganduje

APC Plans To Use Security Agents In Edo, Says Wike

Probe Of EFCC Boss Shows Nobody is Above Scrutiny – Presidency

Meet The Family Of Which Are All Lawyers Including Parents (PHOTO)

I AM BROKEN! My Boyfriend Dumped Me For His Ex

Enough Is Enough, Reopen All Churches Now — CAN